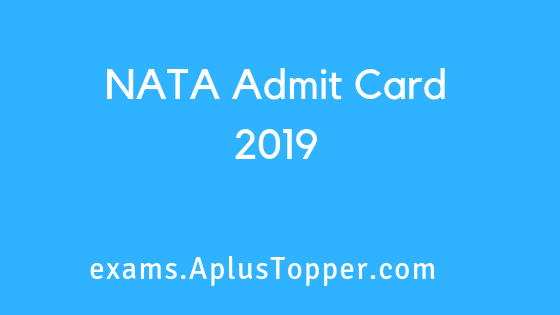 NATA Admit Card 2019: The official notification has been released that the NATA admit card 2019 released on June 24, 2019. The same can be downloaded from the official website of NATA which is nata.in to access their NATA admit card. This admits card will help candidates know about their allotted exam center for NATA 2019. Furthermore, an examination roll number will be generated for the candidate. The candidates those who have done successful registration of NATA 2019, they can only access this NATA admit card 2019.

Before getting into any information regarding the NATA admit card 2019, here is the overview of the NATA test for 2019.

Reporting Time: Ideally, candidates should reach the NATA exam center at least 2 hours before the exam commences. Also, note that any candidate won’t be allowed inside the examination center after 8:30 am. Furthermore, the candidate also needs to put down their signature on a booklet. This signature should match the one which is uploaded by the candidate while filling the NATA 2019 application form.

As a part of the pre-exam formalities: There will be biometric done and photographs were taken of a candidate at the exam center. This will be done at the post where the candidate will take their exam. Furthermore, any sort of impersonation will result in disqualification in NATA 2019 and criminal charges will also be filed against such candidates. In the drawing booklet, candidates have to enter their name only in the block letters, and center code along with the exam center at the required places. No candidate will be allowed to leave the examination hall until the exam is over.

In cases where a candidate finds out the error in their NATA admit card 2019 then they must immediately consult the official authorities of NATA. These are some of the errors that can happen in the admit card

Items To Be Carried Along With The NATA Admit Card 2019

Below are some of the ID proofs that will not be accepted in the exam hall.

How To Retrieve NATA Admit Card 2019?

In case of any mishaps, a candidate can retrieve their NATA admit card 2019 in two ways.