An operation which can produce some well-defined outcomes is called an experiment.

An experiment in which all possible outcomes are known and the exact output cannot be predicated in advance, is called a random experiment.

The total number of possible outcomes of an experiment in any trial is known as the exhaustive number of events.

Events are said to be mutually exclusive if no two or more of them can occur simultaneously in the same trial.

Outcomes of a trial are equally likely if there is no reason for an event to occur in preference to any other event or if the chances of their happening are equal.

The favourable cases to an event are the outcomes, which entail the happening of an event.

When we perform an experiment then the set S of all possible outcomes is called the sample space.

Any subset of a sample space is called an event.

Probability of occurrence of an event:

Let S be the sample space and let E be an event. Then, ECS.

Probability Formulas | Problems based on dice

Possible outcomes by rolling dice are as tabulated: 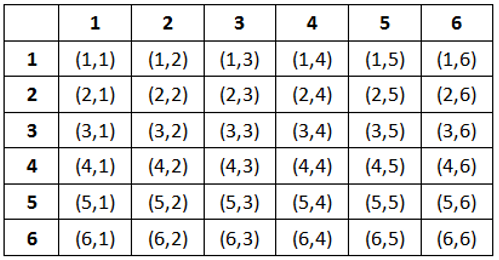 Sum of Possible outcomes by rolling dice are as tabulated: 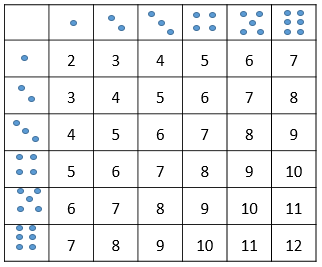 Probability Formulas | Problems Based on Cards

If there are n-mutually exclusive, exhaustive and equally likely outcomes to a random experiment and ‘m’ of them are favourable to an event A, then the probability of happening of A is denoted by P (A) and is defined by

P(A) can never be negative.
Since, the number of cases in which the event A will not happen is ‘n

The ODDS IN FAVOUR of occurrence of A are given by

The ODDS AGAINST the occurrence of A are given by

Let A and B be two events related to a random experiment. We define