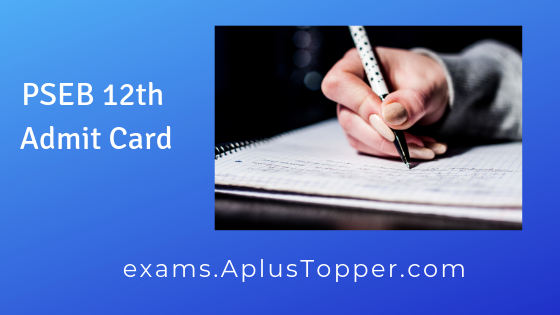 PSEB 12th Admit card will be available soon in the official website of Punjab State Board. Punjab School Education Board(PSEB) is responsible to conduct Class 12th exams. Basically, the board conducts examinations at Middle level, Matriculation, and Senior Secondary level. Also, Punjab Board is responsible for the release of PSEB 12th admit card and results.

Punjab Board will release PSEB 12th Admit card by the end of February. To download admit card, students have to check the official website of Punjab State Board, i.e.www.pseb.ac.in. Also, students can reach to their respective schools to get admit cards, signed by the Principal of the school.

The Punjab State Board or PSEB was established in November 1969 for the development and promotion of schools in Punjab. Punjab board not only conducts exams for all metric and interlevel classes but also it is responsible for providing affiliation to the schools and prescribing syllabus for all the classes from class 1 to 12. Schools which are affiliated to Punjab State Board follow the same syllabus. Textbooks for Class 1st to 12th are also prescribed by Punjab state board along with its compilation, improvement, publication, printing, and sales.

PSEB will be releasing the notification for Class 12th Admit Card 2019, in its official website. Students are advised to check the official website of Punjab State Board on regular basis to get the latest updates related to Class 12th Exam.

Students of Punjab Board can check for the date sheet for the class 12th exam in the following given link, PSEB Date Sheet PDF

Instructions to be followed

We hope this article has helped you to get the required information about PSEB 12th Admit Card and other related details. PSEB Class 12th exams are very close. Students are advised to start doing revision for their exams and score well. Class 12th results will help to get good college or universities for higher studies, from where you can build your own career path.

If there are any queries regarding Punjab Board admit cards or related topics, mention your comments in the below section, we will try to reply to them at the earliest.