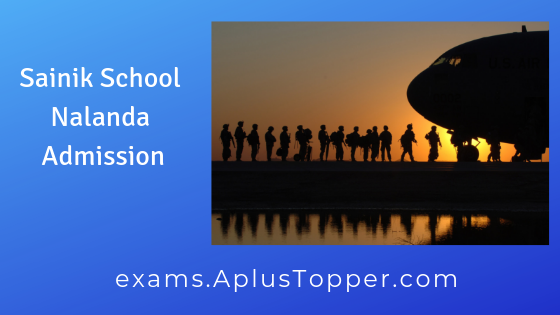 Sainik School Nalanda aims at training and preparing the boys to fight and face the future by developing them physically as well as mentally. The school judges every student on an overall basis and not just on the basis of marks scored by him.

It is ideal for those students who are wanting to make their career in Indian defense and serve the country. The school trains students to get entrance into the National Defence Academy which is not at all easy to get unless the candidate is ready physically as well as mentally to face the tough situations.

Sainik school Nalanda does not give importance to education just in terms of exams or marks but as an overall personality development of the candidate with a sound character, dedication, honesty and patriotic emotion towards his country.

The admissions are open in this school for students from class VI to class IX the entrance exam at all over India level was held on January 6th, 2019. The students who gave exam on January 6th can check their results also on the official website.

There are some important dates and deadlines that each candidate should take note of in order to ensure he/she does not miss out on anything important.

Here are the tentative dates regarding the important events throughout the process of Sainik School Nalanda school admissions 2019.

Actual dates will be disclosed the moment official notification is published on the website.

Sainik school Nalanda also offers a scholarship to students on the fee amount payable based on the parent’s income status. Following is the limit of income on which scholarship can/ cannot be claimed.

This is one of the only schools in India which tends to train students for the defense field right from such a young age. This makes it much easier for candidates to get trained during the training in defense and excel well too.

It has encouraged many boys of the country to take up the defense as their career and serve the country. This enables them to not only be good soldiers but also good humans.

Interested candidates can go through this article to make sure a complete detailed clarity is received regarding AISSE for the year 2019.

In India as on today, there are about 26 Sainik schools spread across various states with common goals. It prepares the candidate in all aspects on an overall basis for the future. And hence, it places equal or more importance on extra-curricular activities as well other than just academically.