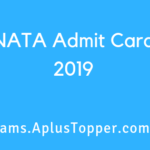 NATA Admit Card 2019: The official notification has been released that the NATA admit card 2019 released on June 24, 2019. The same can be downloaded from the official website of NATA which is nata.in to access their NATA admit card. This admits card will help candidates know about their allotted exam center for NATA 2019. Furthermore, an examination roll number will be … END_OF_DOCUMENT_TOKEN_TO_BE_REPLACED